"Can mess with your credit cards, can whipe out your bank accounts, can even cancel your driver's license, but there's no way anyone can kill somebody with a computer."

As we head towards a technological era where cameras and wifi like 5g will be everywhere, I've also wondered if it's possible for spirits to travel over wifi or through ethernet cords in general. Is it absolutely crazy to think that?

Not necessarily, if you think of how spirits may be made out of energy and how there's already been reports of spirits communicating through radio signals over the last few decades, aka white noise... Ever since the radio technology first came out, people hunting ghosts like Zak Bagans from Ghost Adventures on Travel Channel have been using standard radios to communicate with the dead in various episodes. There's even been a movie made about it called White Noise 2005, where Michael Keaton after losing his wife, later communicated with her through radio signals. But if standard human spirits can travel over radio signals, what else can?

"It is one thing to contact the dead, it's another to meddle and you are meddling!"

Recently I watched one of Rich's videos from his YouTube channel Review Tech USA on this topic. Rich is known to cover a lot of new innovative breakthroughs within the console and pc gaming world, such as artificial intelligence, quantum computing, virtual reality and even misuse of the streaming technology through Swatting which has been weaponized by trolls like Tryler Barriss. Recently though, he talked about one incident where an 18 year old girl became supposedly possessed after using Ouija board mobile phone app...

According to the paper, Quispe had participated in the viral "Charlie Charlie" challenge, in which users attempt to summon a demon named Charlie.

Years ago, there was a movie that came out called Pulse, a lot of Americans hated it, but the Japanese version became a big hit in Japan. But it was basically about spirits that would feed off of humans through wifi... Farfetched? Well since a troll like Tyler Barriss was feeding off of gamer's reaction(energy) when they were SWATTED on live streams, Tyler was basically getting his rocks off, getting an endorphin release after seeing people pissed off after being SWATTED... Is the movie Pulse that far off? Some food for thought... And getting back to what Elon Musk said about the rules and regulations over this technology or even what Rich from Review Tech USA said "don't play with shit like that, this is coming from a guy, like I said who is not religious. Okay just don't touch that stuff, you don't know what goes on and what goes on beyond this world."

Remind you in some parts of the United States and United Kingdom, the Harry Potter books have been banned from being read in schools and libraries because Priests like Dan Reehil from St. Edward Catholic School said there's actual "curses and spells used in books could conjure up evil spirits into the presence of the person reading the text." Some say that's ridiculous since "the first Harry Potter book was released in 1997, more than two decades ago. There have been no reported cases of the books being used to actually summon evil spirits since they were released, despite occasional fears from religious groups." I think banning is quite extreme, but there definitely should be still be some concern, possibly a warning, guidelines or age limit on a Ouija Board app like this, as an age limit has been proposed for the TikTok app on 60 minutes... At such a young age, I think kids don't know what's fake from reality, as well as when it comes to meddling and overuse, they don't know when to stop, especially when it comes to these Tik Tok challenges or other app challenges like the "Charlie Charlie" challenge... 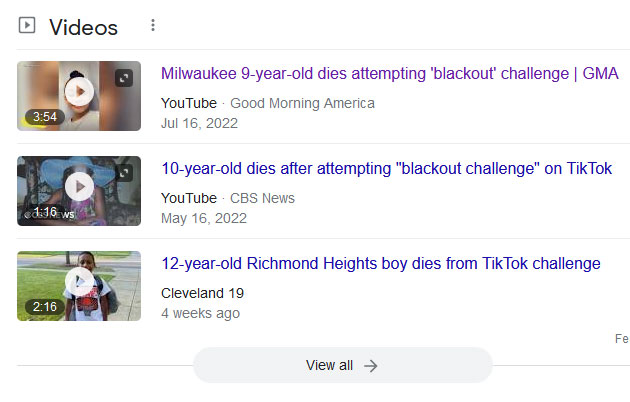 What gets crazier, as we get even more advance with Artificial Intelligence and computers, is a new technology called HereAfter AI that can take information from only four hours of conversations with dead loved ones, that later can be turned it into a program that you can talk to. Some say this might be a way to help with comfort and bring closure with lost loved ones, others say this may prolong your grief and even loosen your grip on reality. 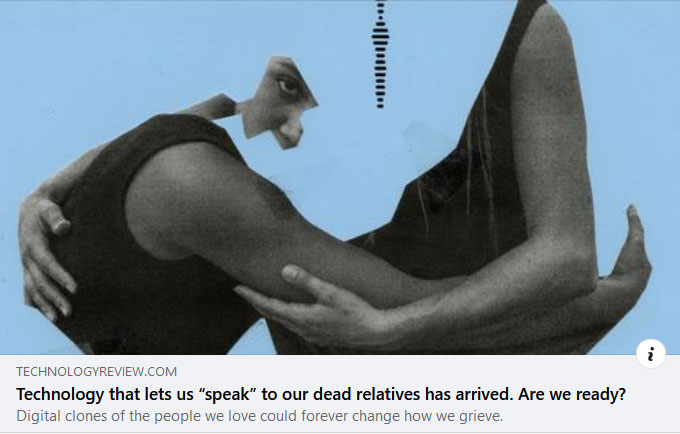