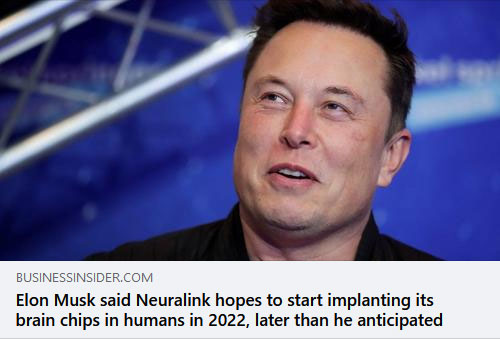 Read this article down below on my break yesterday at work... Could be both a good and bad thing, if you've seen a recent movie called upgrade, but Musk says in order for humans brain to keep up with the intelligence of AI, we must start implanting chips in people's brains with neuralink.

He also said we must implement regulations for AI, he said even though he's not in favor of regulations for majority of things in a free market system, but for this he would make an exception. It would be interesting to hear what Rand Paul has to say about this... I imagine having no regulations for a robot that becomes self aware wouldn't be a good thing, I suspect. Elon theorizes that AI could very much well be more dangerous than nuclear weapons. Just a hunch, this is probably something Ayn Rand didn't consider in her era.

Climate Change and AI are all happening in our lifetime, whether you acknowledge them or not, Bill Gates says another concern to worry about is "bioterrorism" as well, which I'd say many on the other side of the spectrum are in denial about, I myself was a bit shocked after seeing all the denial about gain of function research and then the CDC director was threatened just for just suggesting the Covid-19 is an escaped virus from a lab, as he puts in an a recent interview on CNN, he's allowed to have an opinion. Again this goes back to when things don't fit your own paradigm and the small bubble you live in.

Rogan and even Jesse Ventura had a great podcast about when topics don't fit within one's ideology, people just tend to not acknowledge them because it throws a wrench in their works and makes them question their own belief system, so they basically ignore them! Kind of what Elon Musky said about people thinking their smarter than what they actually are on topics like AI and singularity, how can you predict something that you know nothing about, like what it's going to think of humans when it becomes self aware. Seeing how we've been fighting endless wars, polluting the planet and elites that treat other human beings as a commodity just to make a buck of drugs like opioids. It's obvious for the most part, you could say humans take life for granted and would be willing to make a few dollars even if that meant sacrificing another human being. One can only imagine what AI may think of humans...

While some might think this has no relevancy to a fishing or car channel, believe me it does, some of the geniuses of our time like Ben Goertzel are now saying Singularity or Bust because it could help solve some of the problems plaguing our natural resources, like the plastic issue, PFAS issue, as well as climate change, but as professor Hugo de Garis puts it, AI is a double edge sword on solving these issues.

We live in a very complex world, don't we, some food for thought...

In a recent episode on my fishing channel, I talked about the repercussions of having a fast food restaurant on every corner of America, how that's leading to an epidemic of diabetes, which is then making people take a pharmaceutical drug like Metformin that can't be totally filtered out from our sewage plants, which has shown to be a gender bending chemical of fish, remind you of the Field and Stream Study at the Potomac River where 80% of the fish were hermaphrodites. Kind of ironic I just did a new video discussing this topic and there's a new Matrix movie set to come out soon, anyone remember the scene in Matrix Revolutions between Councillor Hamann and Neo? What they talked about, staring at a water recycling machine, how we need the machines, and the machines need us... Great philosophical conversation, be sure to watch it!

Eternal Angler – “Please Support Family Businesses like Sportsman’s Direct and Lakeside Fishing Shop, they are the last of the Mohicans”