CNN and Fox News Brought to you by Pfizer

Despite numerous videos posted on the internet exposing both news networks lied, people are still gnawing at each others heads on Facebook thinking their side is right lol.

First off, I want to say I respect Fox News for sticking with their guns on the Virus possibly being a lab leak, why? Well because media has been known to downplay possible truth with other pandemics such as Lyme Disease, while it's been shown time and time again, lab leaks are as American as Apple Pie, if you research how a ebola leak almost happened at a lab 25 years ago in Reston Viriginia, also adding in the fact that the Killer bee was also a lab leak. It's very common thing known within the scientific field! What I don't get though is how Fox despite this being a lab leak, downplayed the Virus from the get go, suggesting media on left is just up-playing to impeach the president, liberal scare tactics, amongst other things, downright knowing that a genetically modified virus would be more likely to jump species and mutate into a deadlier strain like the Delta. The two are conflicting and contradicting to one another... Sadly, despite the virus killing more Americans than World War 2, I still see people repeating the fox news rhetoric from a year ago comparing the Cornavirus to the common Flu and that the mortality rate is exaggerated.

As for so the so called network based solely on Science, lol, CNN... What erks me more than the underplaying propaganda from Fox News, is a network that has leading doctors that claims their whole network is based on science and never lies, but still spews out plenty of propaganda and lies on a weekly basis! Take for example Dr. Sonjay Gupta, hasn't this Doctor learned his lesson on alternative treatments for diseases like Cancer after changing his position on Marijuana? I guess not, after his network flat out lied about Joe Rogan taking horse paste version of Ivermectin and saying it's an unsafe drug that can have very scary side effects... CNN reminds me of the people that talk behind your back, but when you confront them face to face, they're stumbling over there words, getting nervous, and can't figure out anything to say...

Afterwards, here comes bubble boy Stephen Colbert following the lead of CNN, who might I add is a total tool, makes a video making light of Rogan taking Ivermectin as an alternative treatment, showing cartoons coming out of head like he's dieing. If we were to talk about the many vaccinated Americans who were slapped on ventilators and left for dead after taking moderna & pfizer vaccine that has 76% and 42% efficacy against the Delta strain, like this Michigan couple here that could bave been saved with an alternative treatment like Ivermectin, Hydroxychloroquine, Remdesivir or antibody treatment... Sorry, I'm not fucking laughing!

Especially when I know, the CDC did the same thing with another pandemic called Lyme Disease, that again might also could be a lab leak as well... When the borrelia spirochete first began to spread in the 80s back in Lyme Conneticut, the next decade the CDC decided to solely concentrate on a Vaccine that only made you immune to a single strain of borrelia burgderferi, remind you, if you look at how many strains of borrelia there on Wikipedia, there are 52 "known" species. So how would an organization expect this Vaccine to cover a new pandemic in New England? Is this good science? Well since the CDC solely focused on the LymeRix Vaccine that was later taken off the market due to side effects and didn't focus at all on the longterm treatment of the borrelia persister cell round body form or the biofilms it forms that protects itself from antibiotics. They not only didn't focus on treatment, but they also persecuted Lyme Literate Doctors who decided to treat with longterm antibiotics for chronic lyme patients, even went far to push propaganda against these doctors on multiple news networks saying that chronic lyme is actually just an autoimmune disorder called PTLDS. In the end, the old saying science always prevails, well it did, as new studies like the one at John Hopkins showed that chronic lyme infection can still persist 1 in 5 patients because of persister cells, there's also the Northeastern Study, Embers Study, and New Haven with Dr. Sapi.

So question is, how did we get here, how did the CDC become so absorbed with concentrating on a Vaccine and not the actual treatment, when these should actually be focused on "both." Well, if you watched the first Documentary Under Our Skin, you'd come to find that some of the same Doctors making guidelines up for the disease, are the same one's who have vested interests in Vaccines, stocks, investments, and even patents etc... But isn't that a conflict of interest? Nope, not when you're under a free market government, seems as though same lobbying that corrupted the science on Lyme Disease is also corrupting the science with pain treatment and opioids at Universities as well, if you haven't seen the movie Crisis, please watch!

In fact, Russian genius Lex Fridman and Brett Weinstein were recently debating on their podcast if it's the man such as Jeffrey Epstein and his greed that corrupted the science at MIT with his lobbying or is it the system itself?

If you don't know this already, our government has transitioned from being a republic to what some professors consider to be an Oligarchy, based off the Princeton Study.

Back to CNN, it really doesn't stop there, as an organization who supposed to be doing credible investigation and journalism before passing judgement on a topic, both MSNBC and CNN were caught burying the lab leak theory. But once the lab leak theory eventually once the lab leak became a common narrative, they immediately changed their tune, but not fast enough, because just as Sandy Hook parents received death threats for Alex Jone's propaganda, so did the ex-CDC director for just having a belief in the lab leak theory. My oh my has things come full circle... The hypocrisy, denial of science is so bad within corporate media right now, for last 5 years I got rid of my cable, I now watch alternative media for my news... Just as some take alternative treatments for their disease, I guess you could say I do the same for my news as well...

And ya know, while Americans are trying to get our country to transition from drugs and treatment that are pushed on us by the establishment to alternative treatments like Kratom or CBD oil or Cannabis instead of Oipioids, even drugs like Disulfiram instead of Autoimmune drugs for Lyme... People's posts and accounts are still getting banned for just mentioning alternative treatments just for Covid-19, I recently discussed this on my own channel through a podcast how we should be focusing on alternative treatments not just the vaccine, while still bolstering the MRNA Vaccines technology as great, suggesting we should use both, I was told if I get caught spreading misinformation not aligned with the WHO, aka World Health Organization, who might I add originally said this virus wasn't transmissible back mid-January of 2020, that I risk getting a strike and my account banned.

Interesting fact is, when lab leak theory was going around both YouTube and Facebook, these corporate social media platforms were deleted posts and banning accounts. Now that it's the norm, they're accepted now. Question is, who gets to say what's science and what isn't? Dr. Fauci maybe? Mister going against me is going against science, who was caught lieing to congress about funding a sub-company who funded the Wuhan Lab for Gain of Research Function and even caught saying "Gain of Function Research was worth it, even if a pandemic should occur, even if a leak from a lab should occur the research was worth it" in an old leaked email from 2012. Again more "Americans have now died from COVID-19 than the number of US troops killed during World War II." I think we're starting to discover, some of the Doctors and Scientists making the decisions for us, might not have our best interest for us Americans, seeing what happened with lobbying of glyphosate, lobbying from sugar industry, lobbying of opioids, proves this time and time again. 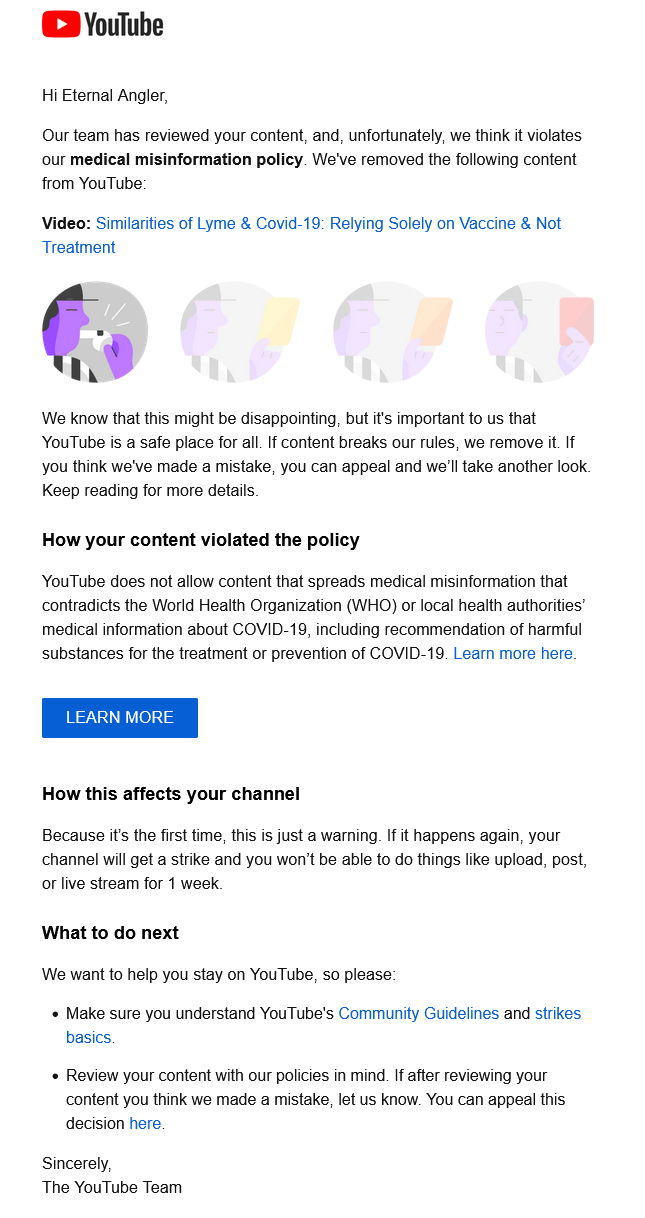 Eternal Angler – “Please Support Family Businesses like Sportsman’s Direct and Lakeside Fishing Shop, they are the last of the Mohicans”