As everyone has been preparing for the Ford Fireworks to celebrate our 4th of July Independence on the Detroit River, I've been gearing up for a new documentary to hit ESPN, titled Unrivaled: Red Wings vs Avalanche, it's about the big rivalry between the Colorado Avalance and the Detroit Red Wings in the 1990s... Be sure to subscribe to Woodward Sports, they really got some great Michigan sports news on that Facebook Page, they were the ones that notified me in my feed about this new documentary set to come out.

Never before has there been such a gruesome battle between two teams on an ice arena I think and truthfully, there may never be again, considering the hockey league has cracked down on enforcers, aka Goons, and hockey fighting in general. I mean I think it's good to they were cracking down on cheap shots, but getting rid of fighting and having enforcers out of the league entirely? Not so sure I agree, this was what another documentary was about I watched years ago called the Last Gladiators, that gives another point of view, give it a watch.

I think a lot of fans thought that this was primarily a rivalry between these two teams that grew organically just because of egoes clashing out on the ice, I think it was to a point, considering both teams were leaders in the league and had enforcers on each team, the documentary focused on that. However, I think that's all they focused on and they didn't go deeper than that... First off, you have two schools of thought, ideology where Russians were taught to cycle puck and Canadians that were taught to dump the puck. This was focused on in the Russian 5 documentary, which also brought up the racial tensions between the Canadian players and Russian players when they first started to enter the league. Even Don Cherry said himself, as revealed in the documentary Russian 5, plenty of smart ass comments saying "is this hockey night in Canada or hockey night in Russia," he also said many times over "the Reds Wings would never win the Stanley Cup with the Russians."

As explained in the beginning in the documentary, when Marc Crawford took the team over as head coachof Nordues, remind you the team was originally based in Qubect, it was thoroughly explained that hockey to Canadians is sort of a religion, hockey in Canada is fabric culture of life. Crawford was warned you're going to be more popular than the Premier, which is equal to the Governor form in our state of Michigan... So imagine a team that's filled with Canadians, being removed from their home town because they don't have the money to afford it, then get challenged by a team filled with Russians and also Swedes that have a different style of hockey that may show them up. I personally think the beef was inevitable. I mean you also include a few Swedish players like Bengt Tomas Holmström and Nicklas Lidstrom in there as well, that also think outside the box, there's just going to be a rivalry from the get go.

I love that the documentary gave somewhat of a second point of view, suggesting because Kozlov smashed Adam Foote's face in the boards, that's why the Avalanche was out for blood.  However, there's also a different way of looking at this as well... Some of us Red Wing fans saw how the Canadian players were kind of targeting the Russians with hard hits that night...  Again, it was talked about in Russian 5 documentary the tensions between Canadian and Russian players when they first entered the league. And honestly, I think it's why Vyacheslav Kozlov was anticipating Foote to hit him and instead grabbed his head and ran it into the boards...  He was anticipating getting hit and was being targeted... And really, since this documentary will be aired on ESPN, I think it's a bit toned down, a bit of a PG-13 version... While I think the Russian 5 documentary gives you the rated R version, even Sergei Fedorov suggesting that the car crash with Konsontinov was purposely done... By who? A racist Limo driver? KGB? Not sure, but in the documentary Red Army, Fetisov also said the same thing!  Considering Vladimir defected from not only the country of Russia, but the army too, ya know Mutha RUSSIA? I think anything is possible! The Unrivaled Documentary even said tensions were so high during the Claude Lemieux and Kris Draper conflict, players were worried servers at restaurants in the opposite state were going to piss in their food!

I have to say, any you youngsters coming up in a sport, be weary of athletes that claim there's a certain way to perform a sport and there's no other way, please take notice, there is "always" a different way to perform a sport, whether it's hockey, baseball, in reference to the movie Money Ball and even the sport of musky fishing. And when sportsmen get on the same playing field together with two schools of thought, it causes a disagreement amongst one another, a disagreement that can turn bloody, shit just pops off! But as Stallone once said in Rocky 4, "in here there's two guys killing each other, but I guess it's better than 20 million," sometimes it's best having those disagreements in a sport, rather than at War. Hence what's going on in Ukraine right now... It's really what the Olympics were founded upon! And as Claude Lemieux said in the documentary - "Ya know obviously a rivalry starts on the ice, but if it stays there, there's not much too it!" I really think this statement goes much deeper than the documentary suggested... 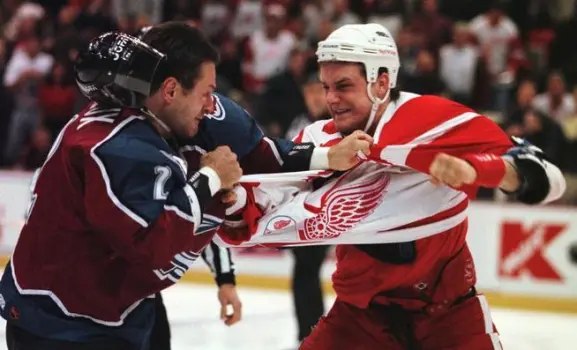 Darren McCarty putting new meaning to the phrase Fighting Irish, remind you my high school I attended was Notre Dame. I was quite proud to have McCarty as one of our Enforcers

Ya know, I'm not so sure if I completely agree with these sports and movies toning down the violence, I think it's great we share our political and athletic differences in these sports, rather than War, again what the Olympics were founded upon... You remove that from sports, I think people are going to start acting out by other means... Maybe I'm wrong! Some might say violence in sports teaches our kids violence, I'm not so sure... Anyways, I think the rivalry between the Qubec Nordigues, aka Coloroda Avalance and the Detroit Reds Wings with Russians and Swedes, as well as some fighting Irish became a historical moment! It really may never be seen again in Hockey, so make sure you watch this on ESPN+ in the extended version!

As I put it in another article, it didn't take a genius to figure out that a NHL team might go all the way to the Stanley Cup, considering it took a Miracle to beat Russia in the Olympics!

And while some were just Fans watching these two tames duke it out from home on their CRT televisions, the rivalry hit me much deeper than that because Al Sobotka was my neighbor and when the Russian 5 brought the cup home to my neighborhood and we had a block party, it taught me there can always can be a different train of thought that could win a sport, it definitely changed my point of view!

"The soviets threatened harsh consequences to players wishing to desert their homeland."

Igor Larinov - "We entertain people, every time we step on the ice, we show the fans at Joe Louis, there's different ways to play hockey."

And to this day, I still have Vladimir Konstantinov's hockey blade that he actually played with out on the ice. Al would always gives us sticks and hockey blades that these Pros played with, some were bent and broken, some were still in good condition, we would saw them down to short version at our height, so we play street hockey with them. Of course I would brag at my St. Clair Shores grade school St. Isaacs, some of my friends thought we were nuts when we did this. But one hockey blade that I received and cherished, never ended up playing with out on the street, was Vladimir Konstantinov's!!!  Still sitting in my closet to this day!

This documentary Unrivaled: Red Wings vs Avlanche, kind of gave me a closing, a sort of completion to the documentary series of that sports era... And honestly, I really fell out of sports since the 90s, I watched when Big Ben and Chauncey Billups brought home the trophy, ever since then, I've been just fishing Lake St. Clair and the Detroit River, reminiscing over great sports memories by watching 30 for 30s and documentaries like these. Some of the great docs have been the Russian 5, Red Army, Fab 5, Bad Boys, the Last Gladiators, Ice Guardians and even the Bob Probert documentary that kind of went under the rug. Also a must watch, if you haven't seen it.

I'll end with, while hockey and fishing is sort of a religion in Canada, I think same thing can be said about hunting, fishing, hockey, and muscle cars here in the Motor City, aka Hockey Town, aka Michigun, aka Great Lakes State. And I think it's by no coincidence, some of us that love to Esox fish for pike and musky: the Russians, Canadians and some of us Americans that show love for this rugged Apex Predator species, also show the same love for hockey! Both are tough sports to compete in and sometimes you gotta go to War with this apex predator, figuratively speaking in a sports perspective, to achieve a trophy size fish!  I just hope these sports can Unite our Countries, rather than divide us! There's already been quite a few close calls in history... 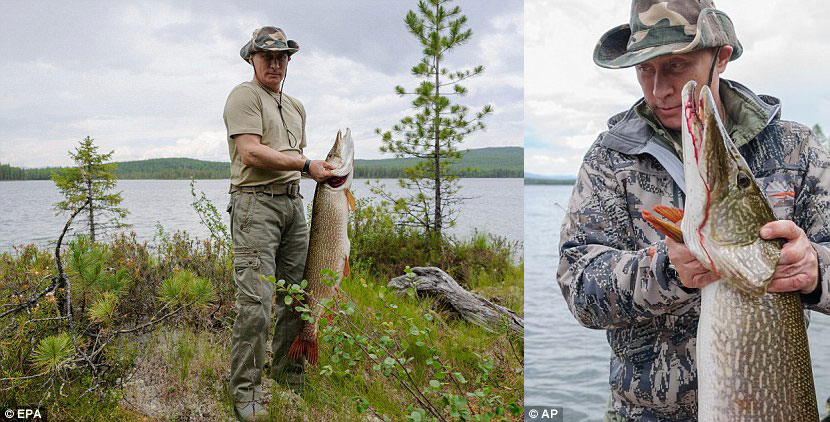 While Russia's leaders might have not liked the players coming over the United States to compete in the NHL, I think it gave their Russian skills a chance to shine, we all know the outcome afterwards of Red Wings winning two Stanley Cups, making Don Cherry eat his words! I think barriers were brought down, almost like the Berlin wall, this became a great time in history!