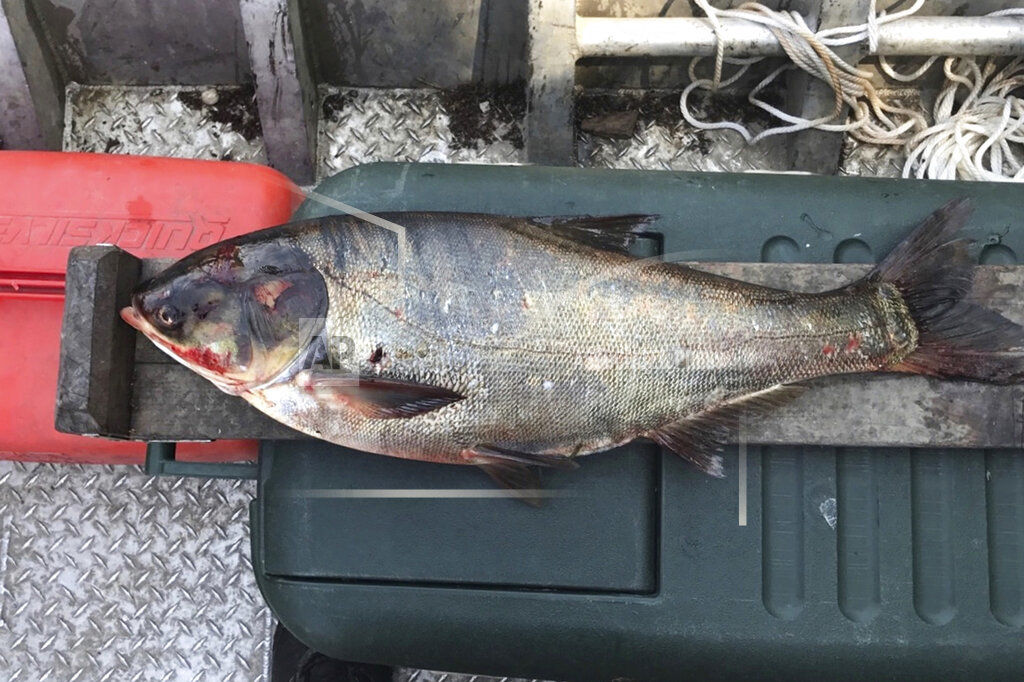 FILE - In this June 22, 2017 file photo provided by the Illinois Department of Natural Resources shows a silver carp that was caught in the Illinois Waterway approximately nine miles away from Lake Michigan. Two invasive silver carp have been caught in southwestern Minnesota, marking the first confirmed discovery of the jumping fish in that area. They were netted this week only about 120 yards north of the Iowa border on the Ocheyedan River in Nobles County. (Illinois Department of Natural Resources via AP File)

Northern Mike has been working with a new musky angler from Minnesota and they've been chatting about what a great fishery Mille Lacs Lake is for smallmouth bass and musky. Without a doubt, it's right up there with Lake St. Clair... You know St. Clair is more than double it's size, Mille Lacs is 207 square miles, while Lake St. Clair is 430 miles. Having that extra body of water and two huge rivers attached definitely give us some leverage for a better fishery, but one of these days I would love trying to fish Mille Lacs. Some say they still have much bigger musky on average.

After hearing Mike and his new co-worker discuss musky and bronzebacks, something popped in my head and wondered if there were any reports of asian carp working their way up that far to Minnesota after reading about this recent report at Bubbly Creek? For the time being, I mentioned it to Northern Mike and thought nothing of it... And said he'll ask the guy! And what you know, a few days later an article pops up talking about how two invasive silver carp were recently caught on Ocheyedan River in Minnesota.

All I can say is, this is not good folks!!! If you look at how further north Minnesota is on a map compared to Michigan, it makes me wonder if we have already have asian carp in Michigan? No one can say for sure, but what we do know is researchers have found DNA from two types of invasive Asian carp in Bubbly Creek off the Chicago River's South Fork, only about 2½ miles from Lake Michigan.

This is very alarming, going back to what Northern Mike and his friend were discussing, what a great fishery Lake St. Clair and Mille Lacs are, I can't image what the economical impact could be to both of our states if we lose the smallmouth bass and musky population, along with walleye and others. If you're not familiar with the reproduction and feeding rate of Asian carp, here's some facts.

Two species of Asian carp, the bighead and the silver carp, eat plankton voraciously. A fish will eat 5 to10 percent of its body weight a day in plankton – and they can weigh up to 100 pounds (45 kg), said Michael Hoff, a fisheries biologist with the Fish and Wildlife Service (FWS). This is far more than what native fish species eat.

The reproductive rate of the carp also sets them ahead of the native species. A single female bighead carp can lay up to 1.9 million eggs in a single year, according to one estimate, Hoff said. Although it is likely that only about 1 percent to 3 percent of these eggs will grow to become adult fish, the numbers are still higher than they are for native species.

What's even more concerning, I really haven't heard anything new on how these States plan on combating this problem.

The only thing that I've heard that may work, is genetically modifying the male species, then releasing them among the population, leading to sterile offspring and the eventual control of the species overall. This may even work with zebra mussels, but far as I know, the technology isn't quite there yet.

There was talks of repopulating the Mississippi River with an old apex predator, the Alligator Gar, this was talked about 3-4 years ago. But it all ended up being just that, all talk and not a feasible option, as it it takes time for the alligator to grow and populate.

Those that watch my YouTube channel and read my blogs, know that I've been doing what I can to bring awareness to this topic, I wish I could do more. I'm not going to sugar coat anything, I just hope it's not too late for the fishery, but it's quite obvious to me we're being attacked from all sides. Climate Change - Rising water levels, Pollution - PFAS, Invasive Species - Asian Carp, and even a growing threat of infectious disease due to warmer climate. Bottom line, we're be attacked from all sides. Are we going to be here after another 10 years? Sure, but it may be a totally different environment than what we we're used to from our childhood. I think it's more about acknowledging these changes and adapting.

I've heard more funding is trying to be raised by our state with the current administration for a additional electric barriers and better flushing lock systems to buy us more time....

Good news, this budget bill was that passed by the house and senate, now onto the administration...

The bill now moves to the president and he is widely expected to sign it into law.