A lot of locals tend to fish big water and deeper water on lake st clair, but it may be worth a try fishing further down the smaller rivers like the Spillway River, Clinton River, St. Clair River or even Salt River in the shallows even in middle of summer... This may be easier way to target them!

I've seen video where an angler catches a musky in back of tiny black creek at metro park in middle summer on YouTube... These smaller rivers may be a good location to use topwater baits like the fat bastard or buzzing bucktails/spinnerbaits, have a lot of fun with topwater which you can't do much on the main lake because it gets rough, it also maybe a great location to try chatterbaits such as TNA's Angry Dragon which I just bought... All the dude that caught musky in middle of summer at Metro was just using a spinnerbait.

I think people would be surprised what monsters lurk down there in the shallows of these smaller rivers, oh wait, we now know because of Eternal Angler's tiger musky video at Black Creek!

One local at Metro Park aksed me once, when he was taking a stroll along the path, what are you targeting with such a large lure back in these shallows? I go musky, even tiger musky... He goes what? They're actually back here in the shallows? I told him, check out my video on youtube, he brings up his cell phone, looks it up... Then says, if you hadn't shown me the video of you catching that giant tiger musky back there, I would of never known that small bay back there of black creek holds musky, especially that size!!!! That dude said he used to live back there off the bay and was flabbergasted!

Look, if there's current and bait fish down there, I'm sure there's resident musky that like hiding in this area even in the middle of summer. Remind you there's less boat traffic down there, no one targeting them... I once remarked how everyone targets the smallmouth bass at Lake St. Clair, so no one targets the largemouth, and they keep getting bigger in the shallows. There's this ideology within fishermen that think you have to travel far to find big fish... A lot of locals will burn a full tank a gas, just to head all the way over to the Thames River to fish for monster musky, in good reason too, less boat traffic, calmer water, and less fishing pressure. However, what if there's locations like this in the shallows of these smaller rivers right in you backyard, but a lot of locals don't realize this, so they just always go for bigger water because of the thought process of thinking deeper water means bigger fish.

Old saying, if everyone jumped off a bridge would you? Some anglers do the same shit every fucking year... Mainly because they can't think outside the box, they're programed by other fishermen, similar to the way they're brainwashed by by the news they watch on Television with politics by talking points on both sides, so they never break any barriers... Those that break the barriers and do something different, are the one's that make fishing so much more exciting! I talked about this with Hook n Look host once with local professional angler Kim Stricker, I told him how much I was influenced by the Lindner Brothers In-Fisherman to target Esox such as "pike" and musky. Ya know everyone dogs on the pike, saying they're worthless and a garbage fish, but there's those of us that still love catching these little predators, even the smaller handle hammers with jerkbaits, which can still be a lot of fun!

Me talking about the alligator sightings.

And again, I mentioned this in a video, I still think the alligator sightings people are having on the Spillway and Clinton could be just Esox poking their head out of the water and skimming the surface, some could be 50 inch musky hint hint... If a person going for a walk, hadn't known pike and musky do this, where they have evolved and possibly hunt on top, what would you think this is if you saw it? Funny, when I shot this... There was like a dozen people in the area, even numerous people walking by at Metro... I was talking to an angler about catfish and how he said he might of seen a musky eat a duck in back of the canal of black creek, when out of the corner of my eye I saw water movements, then saw a slight angled head sticking out of water... My hunting body characteristics told me, drop everything in your hands, stop talking to this catfish fishermen, and grab your camera! I did just that and captured one of the closes encounters of a tiger musky skimming the surface in the back of the black creek at Metro!

By the way, speaking of catfish fishermen, in this recent video posted on Muskie Nuts facebook group, be sure to join here!

These anglers in this video heard of catfish fishermen having break offs due to musky, they decided to do something different and head down near the damn where these catfish anglers spoke of folklore tales of monster musky breaking them off, guess what, they found some monster musky and had a blast.... Think you can't do the same on a kayak, plastic pontoon bass raider, or even with waders on Spillway, Clinton River, Salt River or any of the smaller creeks that split off on the St. Clair River? Momma always said, stupid is stupid does...

There's a dude named Cameron Palowitch that has a blast targeting musky with waders on a small river in Kentucky after they stocked them there... You definitely could be doing the same, untapped resource, I'm telling you!

And back to the local walking the pathway at Metro... Here's the thing, years back when he lived on that Black Creek bay, it's possible that the musky weren't that populated there back in the 70s and 80s when he lived there... However, I did hear from one local angler, that even back in the 80s, he knew of some anglers catching musky at the mouth of black creek... So they might have been there in a small population... It's interesting, because in this video there's a small plaque back there that talks about why they dredged black creek... It's funny that the park has a closeup of a small hammer handle pike, does the park officials and DNR know that this creek is home to monster musky, as well as a rare breed of musky such as the tiger musky? I bet, probably not... 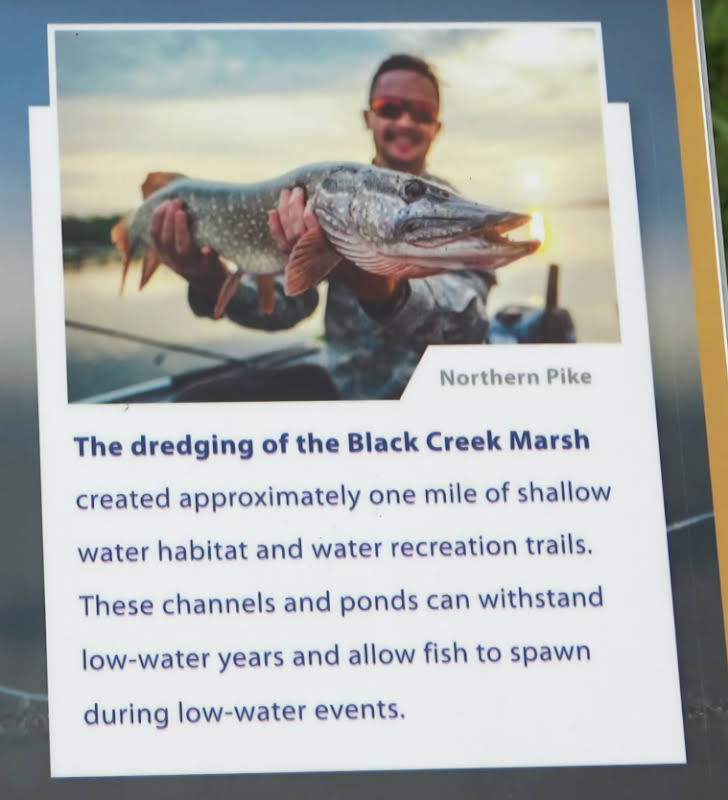 And I'll say this, if you're casting for these beasts in these shallow rivers and still can't seem to find them, try trolling for them from a Hobie Kayak with bucktails, spinnerbaits, topwater prop baits or even the strike king 8.0 like I did to locate them, hint hint!