There has always been a folklore connection of full moon phases with people acting squirrely in mental hospitals, some scientists have said there's no connection, despite 81% of mental health workers claim there's a relationship between full moon phases and  between human illnesses. After taking a second look at this, analyzing the connection of bartonella with schizophrenia, along with the uprise of bartonella and borreliosis with tick bites due to a warming planet because of climate change... More and more hunters, fishermen and soldiers being infected with bartonella, aka Cat Scratch Fever and Trench Fever. I do think there are some patterns here we need to take a closer look at! I will get to the musky lunar phase momentarily, it's all very relative I think!

If you aren't aware, human beings need sunlight just as much as plants do. As we absorb sun light into our skin, it converts the light into Vitamin D, which in return becomes a vital hormone building block to our immune system and even mental health. So the question is, since the sun has a major effect to our body, why would we think the moon wouldn't have any effect on us? Interesting story, I have a friend of the family that is from Finland, that has said due to part of her country not receiving any sunlight in the month of the December, that many Finnish people think it puts a major strain on their mental health. 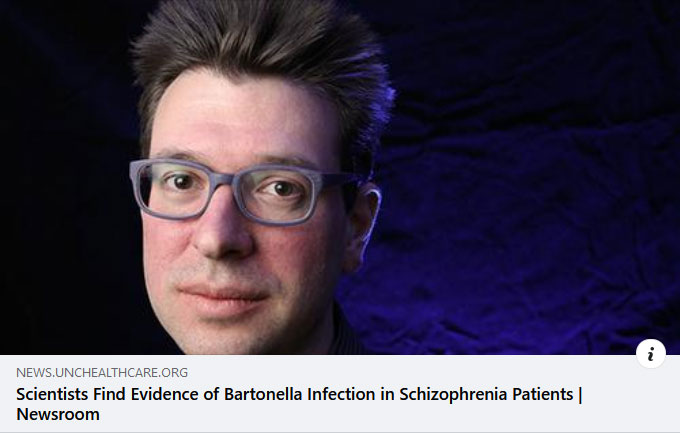 There was a recent study published that tested 17 people diagnosed with schizophrenia, 13 people tested positive for the bacterial infection known as Bartonella. One of the common things patients I hear from patients on the bartonella forum is, they feel a flare of this bacteria going haywire within their body on full moon phases. So after hearing this common thing expressed on the forum and the mental hospital folklore, is there a direct connection?

One of the new major revelations within the medical world was the discovery of the gut and brain connection... There was a study done, where they took mice with anxiety, implanted them with gut cultures from mice that didn't have anxiety, and the mice became more social. Pretty interesting huh?

Ya know, as these tick borne diseases rise with the unbalanced ecosystem due to milder winters, there are others who are also starting to notice strange patterns as well, not just with the rise of diseases due to climate change, but also the way people are acting due to an imbalanced planet.

So it makes me wonder, is there a direction connection with bartonella and the rise of mass shootings?  Youtuber Better Health Guy tends to think so, he discussed this possible connection with Dr. Evan Hirsch. And he wasn't the only one that made the connection, Kris Newby's documentary Under Our Skin 2 proposed that the Sandy Hook shooter might have also been infected with borrelia or bartonella, after discovering his mother was diagnosed with Multiple Sclerosis, a common misdiagnosis of Lyme...  Suggesting that the borrelia infected mother passed down the spirochete during pregnancy which also might have caused his Autism... Here's another story of a Pastor killing.

What's also interesting about bartonella bacteria, is some Doctors are starting to notice the consistencies of it possibly being linked to Iraq War Veteran's PTSD, just like Gulf War Syndrome and Mycoplasma from desert sand fleas, here's an interesting article by Dr. Rick Sponaugle that makes the connection.

We have a saying within the fishing community, especially within the musky hobby, look for patterns to help you target a fish species. If you find a pattern, jot it down, it will make targeting an elusive species like the muskellunge a lot easier, aka fish of 10,000 casts! Top musky guide Jon Bondy claimed in a presentation at Sportmens Direct, he hasn't seen musky get that active during the full moon lunar phases, but he made the remark, when he was a kid, having a fish tank full of bass, he noticed when they were laying in a daze during a full moon cycle, almost like in a zombie state, he would turn the light on and the bass would go ballistic. He also said, while he hasn't seen a connection, another top musky guru has, Joe Bucher. Bucher claims if a full moon lunar phase is headed your way, prepare earlier in the day to sit on your best spot towards dusk and night time when this apex predator goes on the feed... Now this makes me wonder, is there a connection to the full moon lunar phase and the active bacteria within the musky?

I think it's safe to say, bacteria has a major influence on the way animals and humans act towards their environment! Now is their a connection of the moon phases and the active bacteria within the musky? Just not enough proof, but I still think it's an interesting theory and deserves some attention...

Ya know, there was a folklore remark made about the moon in Alien vs Predator, when the the helicopter was traveling across the Arctic to the ship, the Italian archaeologist Professor Sebastian De Rosa said the full moon lunar phase symbolized a Hunters Moon. There's just so many references within folklore, is there something to it or is it all just coincidence...