So I previously talked about how I wanted to make a bull dawg chatterbait, attach a chatterbait blade onto a Pounder, maybe to entice the bigger musky more. As I believe in, if you can bring out more senses of the fish, especially musky's lateral line, you're more likely to get them to bite and bring out their hunting characteristics!

There's definitely been a little push back though on chatterbaits within the musky community I noticed, had a friend named St. Clair Assassin say, remind you he runs a charter on Lake St. Clair so I value his opinion big time, he said he trolled a TNA Angry Dragon next to bucktails all over Lake St. Clair in different hot spots and the musky didn't want any thing to do with the lure. I definitely believe him ! However, that's a chatterbait with tinsel and bucktail, which I think is a bit overrated... What about adding a chatterbait blade to a lure profile that already works, such as a Musky Innovations Bull Dawg or Chaos Medussa? 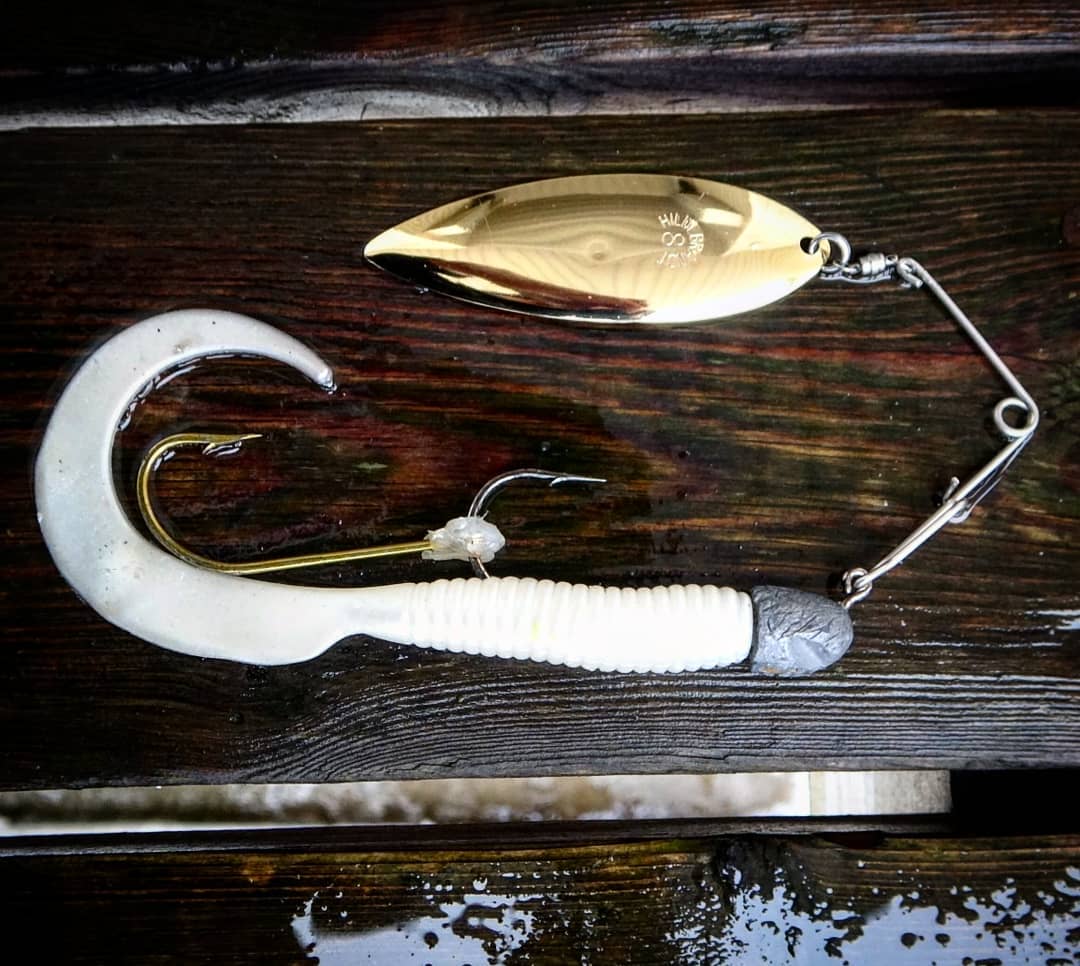 Remind you, when I made my custom musky spinnerbait, that can adapt from 1 oz to 8 oz in matter seconds, use from shallow to deep water, I didn't use any tinsel or rubber skirt. And it yielded great results, actually catching one of my biggest tiger musky's to date! I think I went like 3 for 6 one day at the Grosse Pointe Yacht Club! Not bad for an amateur angler with a spinning reel and my first musky lure I ever made...

One of my biggest tiger's caught on my custom spinnerbait! 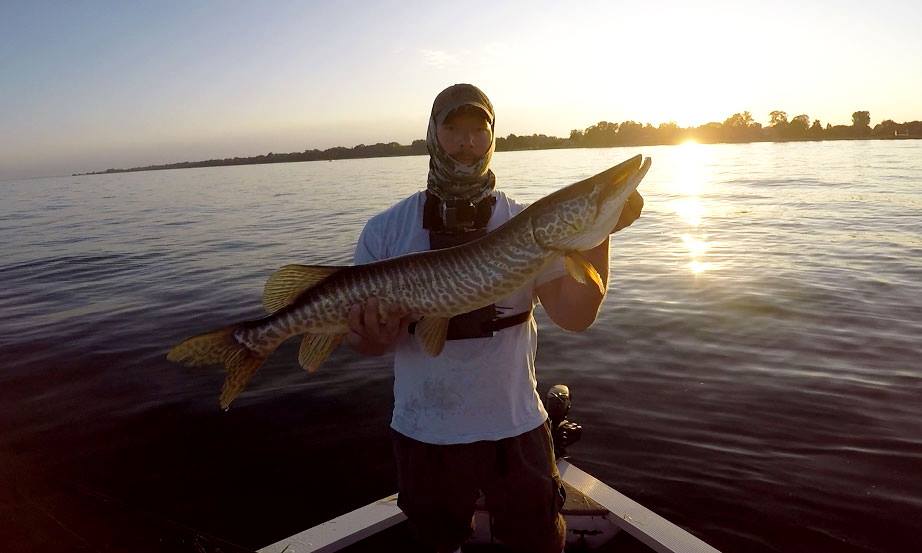 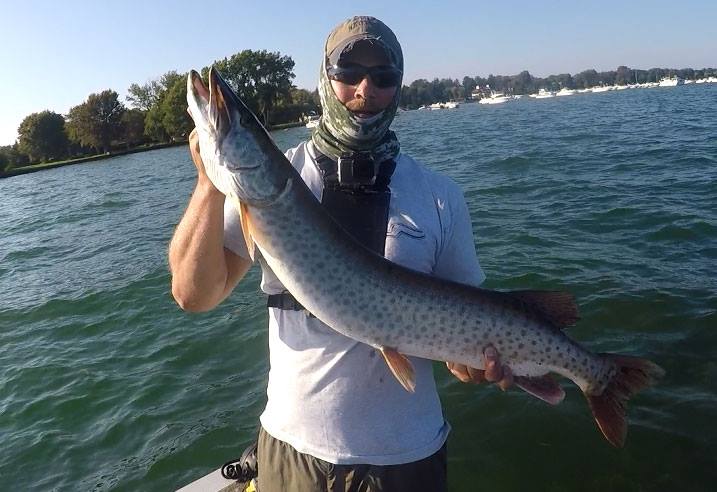 According to a few anglers on Musky Nut Facebook page, a chatterbait medussa has already been done many times over, lol, and it doesn't yield good results. One musky angler even said Robbie and Lee from Todays Angler has already done a video on this, quote "why am I just copying their shitty footage?" By the way, that shitty footage and Robbie & Lee already did that years ago comment was later erased by the way... After I tried looking up "chatterbait medussa" on their youtube page, sorry couldn't find it... 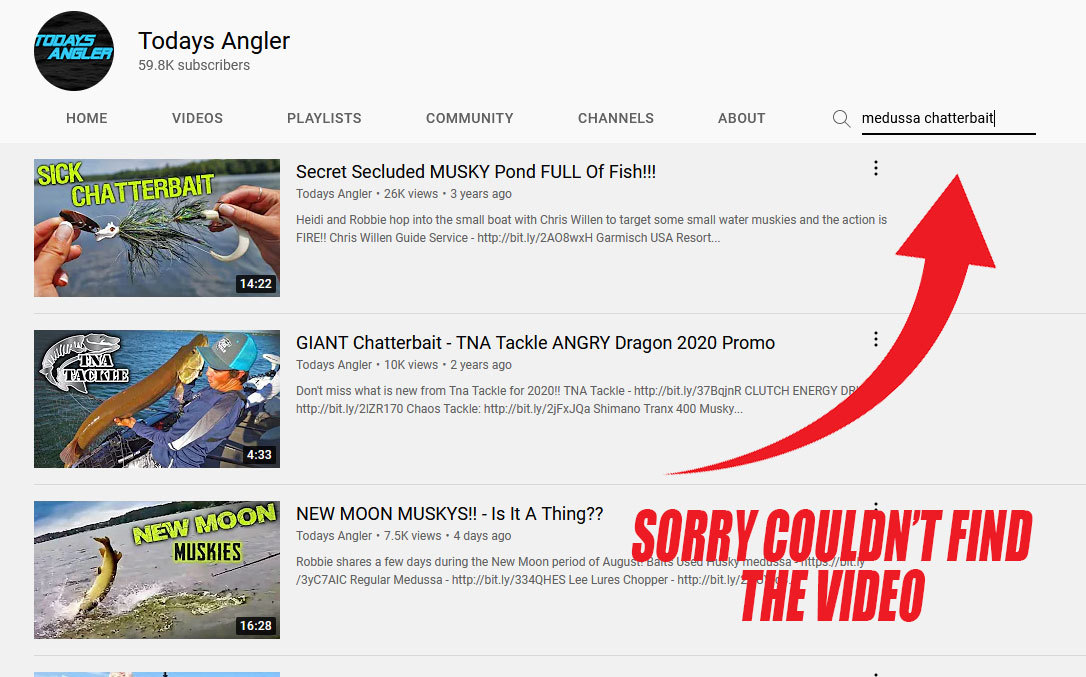 One musky angler even went out of there way to say, all TNA Tackle does is take a mass produced blade from LurePartsOnline.com and stamp their logo on it? Which was later found out to be just B.S. after someone challenged them! And honestly, that LurePartsOnline.com chatterbait blade looks nothing like TNA's blade. 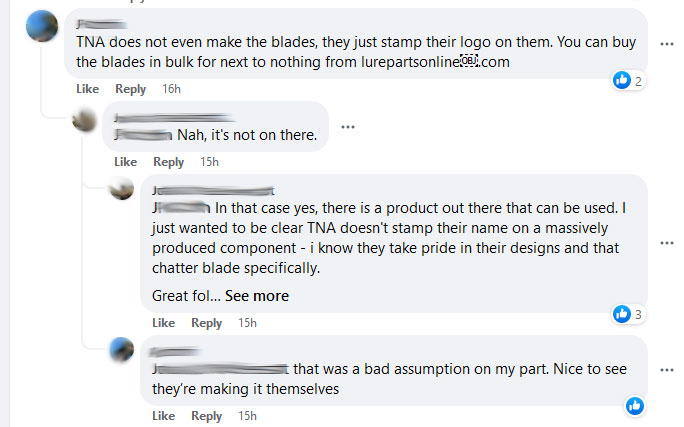 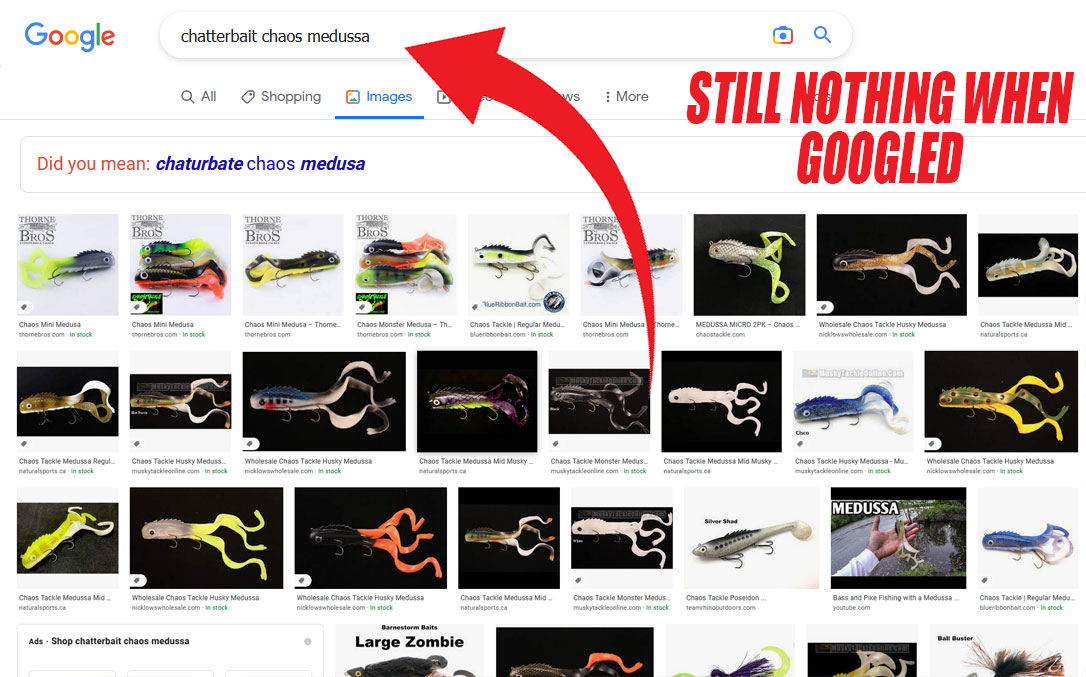 Without a doubt, it's quite obvious a lot of people run their mouths in fishing, that's why I always recommend to follow your own rhythym and ignore the bullshit, I highly recommend it, yields great results. While I'm sure there's a few musky anglers that probably have tried adding a chatterbait blade to a few of the popular musky lures, however, I still stand by what I said that we're still scratching the surface with this profile, since there's like only two musky companies that currently sell chatterbaits, scratch that, I recently did see a chatterbait posted on MuskyShop.com called Spit Fire that looks sweet...

Growing up as a teenager, have you ever stumbled across a sweet song growing up, then you share it with a group of guys, then they say oh yeah that's song's old and I've already heard it before. Or how about when they do this with movies, that movie is old, big deal? Truth is, enjoyment of the art is within it's beholder, watcher and listener, if you enjoy something, don't let others deter you from enjoying that particular piece of art and maybe modifying it in the future... This is basically done within the music industry all the time, Biggie and P-Diddy, taking an old song and putting your own spin on it... "Take hits from the 80s, make them sound so crazy..."

Life learning Lesson Eddien Van Halen made, when he couldn't afford a real premium Fender guitar, so he took pieces from a knock off guitar to make his own guitar dubbed the Frankenstrat with a unique rift sound that everyone's has grown to love. 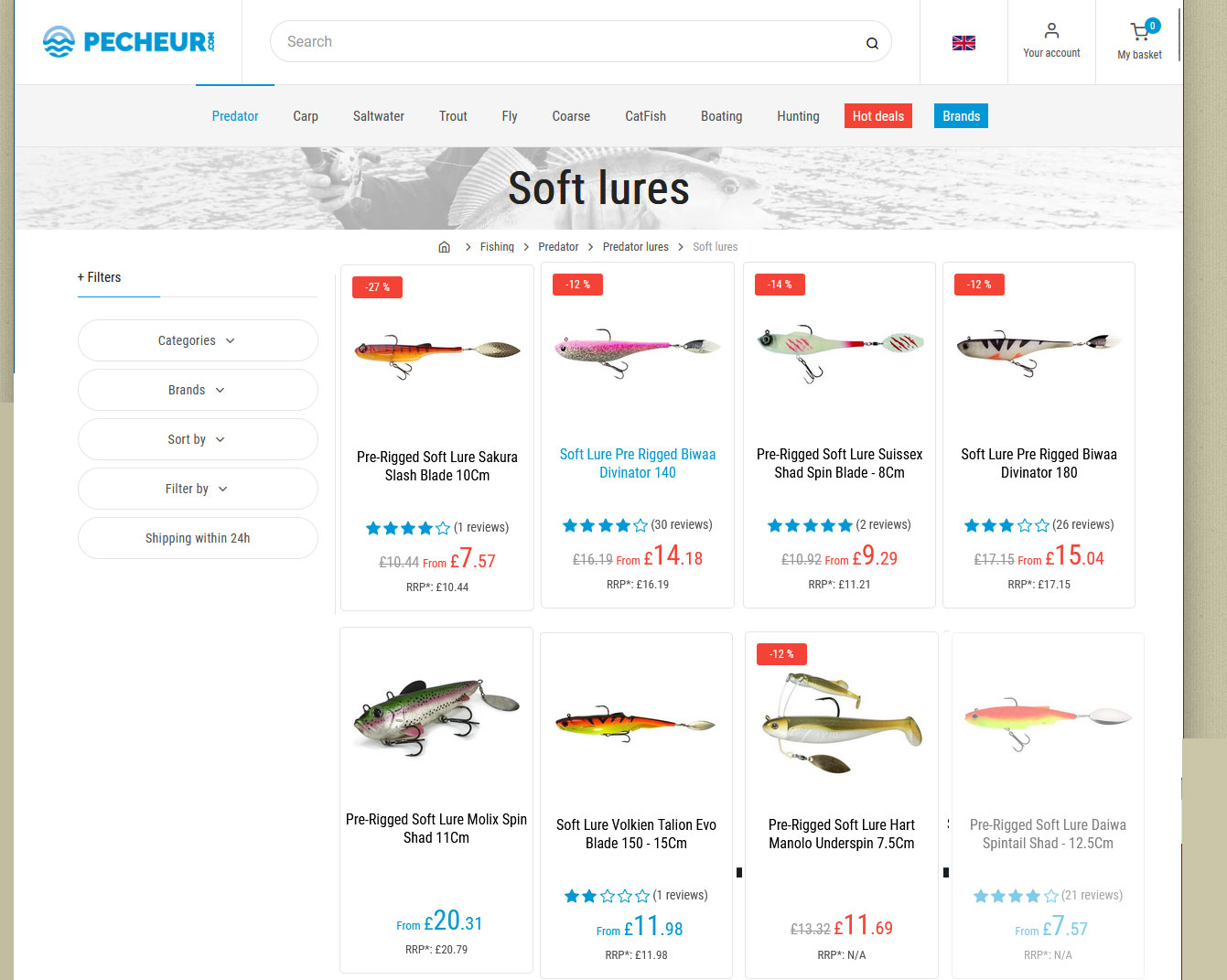 Look, even on the world fishing market as we speak today, pike bladed swimbaits are super popular in Europe, when they're just starting to catch on in the States, I think there's only one company that makes the right now, and that's Water Wolf Lures with the Shadzilla V. 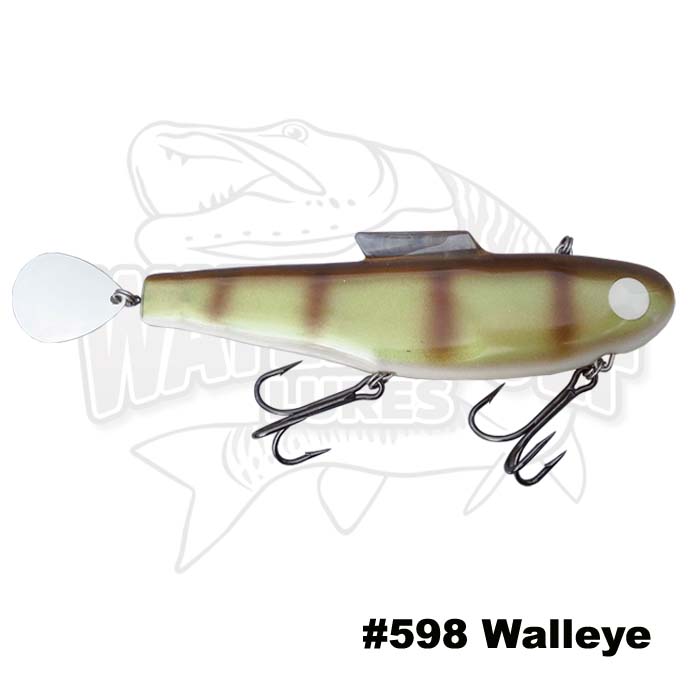 This is the fishing hack I currently have in the works, where I'll cut off the tail of a Chaos Posseidon, then attach some forged wire, then the #8 Hildebrandt willow blade!

By the way, after checking out there site, I do see that Water Wolf just recently came out with their own chatterbait grub. One hell of an innovative company! 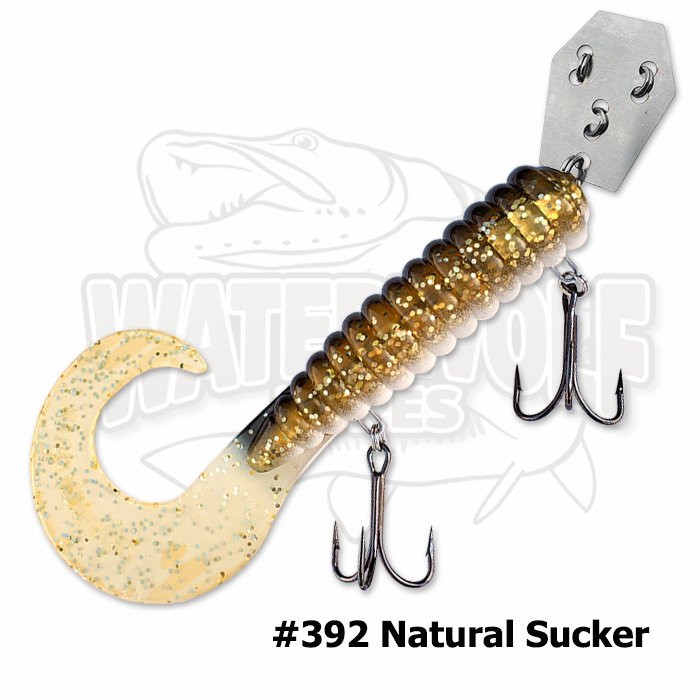 But again, chatterbaits are still just starting to catch on, just like bladed swimbaits which are still in their infancy stage even for bass fishing!

The US bladed swimbait version called the Hyperlastics Dartspin, that recently came out and is just starting to catch on with the jar heads... I think it would be cool to see Captain Wayne Carpenter use his bilaminate or trilaminate custom natural forage technology stuffed in a swimbait with a blade on back, now that would be cool!

Barely any bladed swimbaits on the market, fishing company Suissex shipped these 7.5 inch Shad Spin Blades over from France, they seem to work, other than the fact the musky are biting right through the wire, vicious bastards! lol I'll definitely be buying forged wire when I make my custom Posseidon bladed swimbait!!!

Update Setpember 23, 2022: What's interesting is, one musky angler said he "hasn't been thrown much, attached a Medussa onto an Angry Dragon Chatterbait and landed 3 musky this month on it." Also said he's fished dragons for a long time and haven't caught a fish on them, but "I think they work a lot better with a medusa than without it..." I'd say it kind of goes back to what St. Clair Assassin said when he trolled the Chaos Medussa all over Lake St. Clair, nothing!

Interesting huh? The importance of modification! 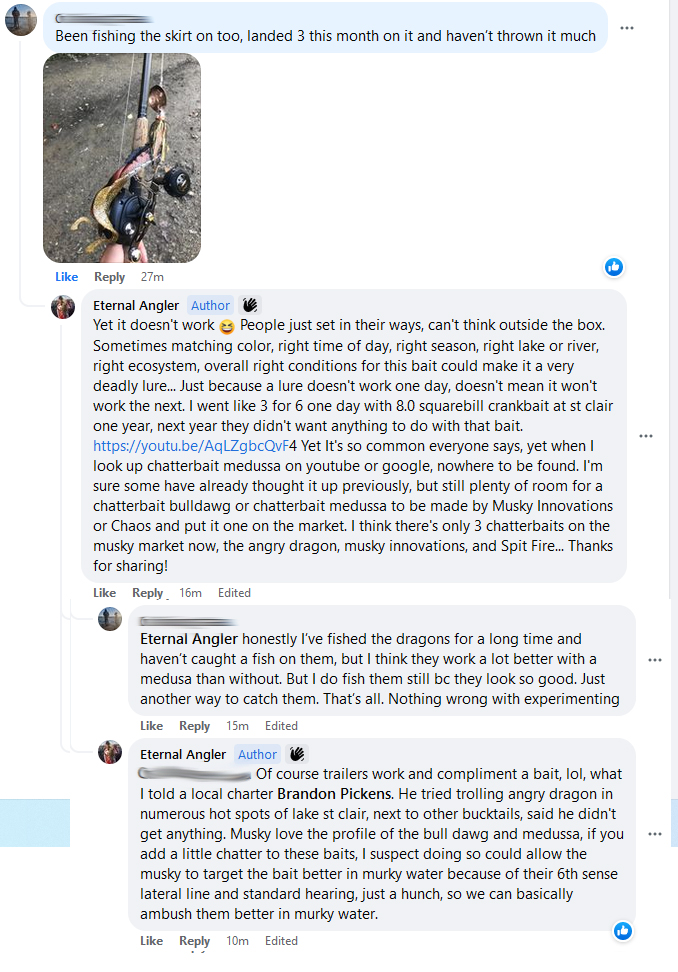