So I think this will bring some interesting discussion to the forum, I figured I'd just add it to the fishing reports of Kent Lake.

So anyone has fished Kent Lake since the 80s and 90s knows it used to be a popular smallmouth bass lake, actually loaded with some consistent 3-4 pound smallmouth bass, even 5 pounders I think. I remember when there was a tournament back in the 90s and I went to it, I couldn't believe the size of the smallmouth bass coming out of Kent.

I'd say the population was probably somewhere around 60% to 40% smallmouth to largemouth when I went to the tournament back in the 90s. Then when I fished Kent Lake with my Pelican Bass raider in the 2008-2009, I'd say the ratio was around 35% to 65%. Now it's somewhere around 10% to 90% I'd say, but this is kind of based off fishing from the shoreline as I haven't fished from a boat that much out on Kent and there could be a lot more smallmouth bass in the deeper parts of Kent on the west side of the lake.

I wonder why such a drastic reduction of smallmouth bass over the years is due to the abundance of northern pike which the DNR doesn't seem to take concern about? Is it due to overfishing? I remember 15-20 years ago, it seemed like every weekend they were having small club tournaments out on Kent every weekend, someone always posted this on the Lake St. Clair forum. Then there's maybe the warmer climate, considering smallmouth bass are a colder water species, is climate change and warmer water temperatures affecting them? Is it due to more pollution with the PFAS? Maybe more gobies and zebra muscles in the lake?

I remember back in 2008-2009 they had a major problem with this globs of green algae that overran the lake, it doesn't seem to be affecting Kent as much as it did back then. But I've read too much algae can sufficate the eggs....

What's weird is, there still seems to be quite a bit of smallmouth in Huron River, it's strange how more smallmouth bass aren't working their way into Kent Lake in the spring and fall when feeding and fishing is prime time. We still get some nice one's here and there, but nowhere near like what it was. Maybe too many fishermen keeping the fish for eating, well I guess that just goes along with overfishing.

Anyways, let me hear your opinion or just tell me what you think. I mean sometimes ecosystems just change, there's a natural cycle.

By the way, Stony Creek was known for it's walleye and crappie, boy has that ratio changed, now it's basically known as a pike and largemouth bass lake. A lot tougher lake to fish now I hear too, we went over there last year and did have a hole lot of success, but we still caught some decent largemouth bass.

Anyways, here's a shot of a smallmouth bass all the way back from 2008! Got her on a white 1/4 oz Beetle Spin and Hildebrandt willow blade I use. 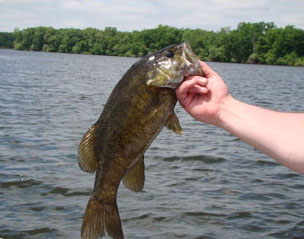 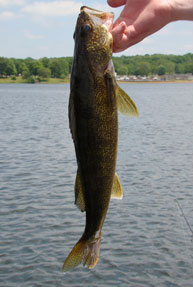 I think my girlfriend Erica was with me on that day to, she had a nice followup of a bass, nipped at her bomber crankbait then took off. Bomber crankbait also worked very well for me at the west side of the lake near the big pier.

Great memories back in the day fishing Kent, for all I know Northern Mike and I crossed paths one of those times...

But I wonder if being out on a boat will extremely increase our chances of catching smallmouth, especially being on the west side of Kent Lake in deeper water.

I know fishing from the shoreline in the summer on Lake St. Clair can be very tough catching smallmouth bass, especially in the summer as they head towards deeper colder water. It's no problem catching smallmouth bass n the spring time at the 9 mile pier, as they're pretty shallow when spawning, but once the water temps heats up, they head out to deeper water like clockwork every late spring early summer.

We gotta try fishing the west side of Kent from my boat or yours, I suspect it will increase our chances of catching some Kensington smallies!

Regardless of all that, without a doubt the smallmouth bass population has dramatically decreased over the years at Kent... I wouldn't be surprised if warmer water and milder winters plays a part in all of it! Kent is a fairly shallow lake until you get on the west side of the lake. The limited amount of smallmouth bass at Kent are probably staying in the colder deeper parts of the lake, the whole east side where we've been shoreline fishing is a lot shallower. 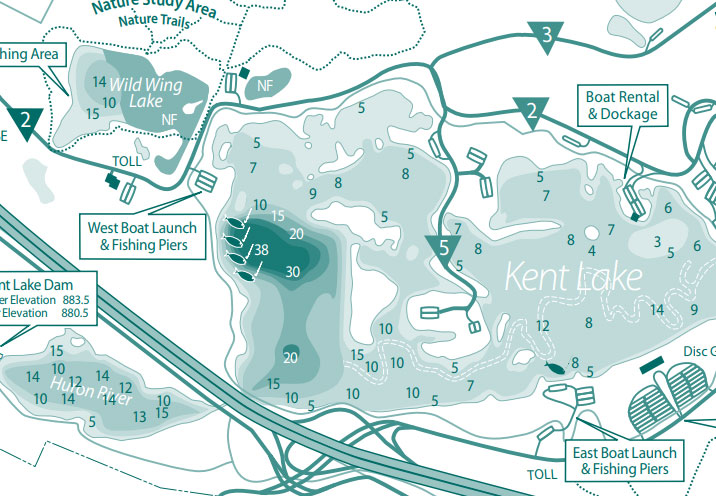 And I wouldn't be surprised if the reason why we tend to catch more smallmouth bass at night is because of the air and water temperatures are cooling down.

My dad and I caught a few smallmouth bass on the Huron River 10 years ago from the Pelican Bass Raider or where the new map just considers the south side of Kent Lake. Looking at the bathymetric map, it explains why, this part of the lake is deeper than where we've been normally shoreline fishing from. 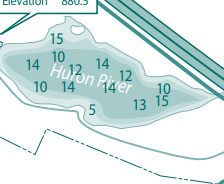 Glad I made this post, I really didn't think much about all this until I posted this on the forum, again this the benefits of using a fishing forum versus bullshit social media sites like Instagram or Facebook, better communication.

We mostly targeted largemouth bass anyways at Kent Lake because we fished from the shoreline, but now we both got boats, we gotta try hitting the deeper regions of the lake. Gotta find them honey holes for some nice bronzebacks, I know they're out there!

Damn, Kent gets down to 38 feet deep in this location, gotta be a Kraken hiding out down there.