I've talked about it in previous videos how much I admire Directors like James Cameron, Ridley Scott, Tony Scott, Michael Mann and Martin Scorsese... I think the most I admire is Cameron, how he jam packs so much action and killer theme song into his movies, despite him being one of the top directors of all time, did you know he was just a plain out truck driver when he first started studying film? Just like Eddie Van Halen who was poor and didn't have the top tools of the trade to start playing guitar, that didn't stop him, he used the bootleg parts he had at hand, then used them to perform unique guitar rifts what we know today like Ain't Talkin' bout Love. I think you could say the same thing about Cameron that just went to a library rented out a few books on film and used a cheap camera to start off filming, no one says you have to go to college to study the art, similar to a motivational speech Matthew McConaughey gave on school and college... Some things aren't taught at school, some things are taught just getting out and life from learning through trial and error, by experiencing...

I myself have done collaboration with one of the best bass YouTubers who film his expeditions named Arcasting, he's definitely an artist... First thing I asked when I met him, if he painted or drew art when he was a youngster, he said yes... But getting to my point, Ar has a great solid job he can afford a very expensive DSLR that costs $3k+ with very expensive lenses that produces an amazing high definition, I'm here to tell you, even though he's made some incredible fishing videos using this Camera, you don't need to pay high dollar for a quality camera and film quality videos, you can still spend a lot less, get the distance factor with a cheaper camcorder like the Sony FDR-AX53 that has an incredible Zoom that matches his expensive lenses, and also get even better stabilization with the custom B.O.S.S. stabilization that has a built in gimbal. I think some of us always get caught up with always having to buy the most expensive electronic to film our expeditions, then we're hauling around a giant case with multiple lenses, making it a pain, along with lugging around our tackle box, which in the end Ar ended up some having to ditch the camera and case all together, which I seen Arcasting do down the road and just film with the GoPro mostly, which a single GoPro can go a long ways in general. What's nice about the FDR-AX53 is it's small, compact and has all the features of a gimbal but isn't clunky.

I saw one dude walking around the Woodward Cruise this passed August hauling around a giant gimbal on his chest with an expensive DSLR... I'm not sure if he's going to be posting his videos on YouTube so I could compare mine to his, but the point I'm trying to make is, my videos are probably just as good as his, and I paid a lot less for a professional filming setup. Bottom line too, some photographers and videographers always say this, whatever camera you have, whether it's just a camera on your phone or just an old GoPro, "just get out and film man," have some fun. Don't get wrapped up in always having the best gear, it's same for musky fishing, if I waited to the point where I could afford a premium baitcaster like the 400 Tranx and a Tackle Industries musky rod that would cost upwards of $600, I would of never musky fished. Just get out and film, have some fun, focus on you, ignore the chatter in the background... The people that say you have to do this, you have to do that, ignore the BS and again find your own Rhythm!

Ya know even though Tom Cruise said he was going to wait with a Top Gun sequel until technology improves and wait until the camera hardware improves to capture the best shots of these fighter jets do there thing, bottom line, is Top Gun 2 any better than the first one? lol There's much more to making a great video than just the technology, there's the writing, dialogue, quality actors and even a good soundtrack. The soundtrack just wasn't there with Top Gun 2... And you didn't have the dialogue you had between Ice Man and Maverick with Rooster and Hangman... Just wasn't there, even before the movie came out Tom Skerritt made a comment on how the sequel will never be as good as the original. I mean true, most of the time it never is, most of the time.... Terminator 2 Judgement Day comes to mind, but the point is, even with all the technology, Tom Gun Maverick just didn't have the excitement as much as the first. Some of this might have to do with too much nepotism within Hollywood now, some of it might have to do with shitty music within our era, as well as letting actors improvise scenes. Did you know in the movie Caddyshack, a lot of the scenes were improvised by Bill Murray because his best bud and director Harold Ramis gave him free room too roam... I wonder if we're starting to lose that in Hollywood? Sad to say Harold and Bill supposedly had a falling out after the movie Ground Hog Day I heard, but I heard they met back together on Harold's deathbed...

I think some of us don't realize how much our culture is influenced by our music, how much it influences a great quality movie too!

I think Ghostbuster Afterlife and Top Gun Maverick were good films, but great? No, I think people easily get charged up on nostalgia, aka fan service, they don't realize how much these films fall short in other areas... Which they are big time!

Anyways, I'm a sucker for living in the past, talked about how much I myself do like nostalgia and retroness, still watch movies like Predator and Aliens over and over to this day. For some reason, still even enjoy creative trailers like this that bring new life to these movies in a weird sort of way, but there's a new documentary set to come out on the movie Aliens, that is probably going to dissect each scene and explain what makes James Cameron a so innovative director! You gotta watch this when it comes out, I do love documentaries as well... Big fan of the 30 for 30s and documentaries like the Fab 5 and Russian 5, as I explained in previous articles, you can learn a lot about culture, philosophy and art by watching these documentaries, make you become a more understanding human being I think, rather than always close minded!

And I'm not the only one that still likes watching Cameron's movies over and over again, there's huge facebook fan groups for these movie titles, and they're still even making funny memes like this to keep these iconic cult classic films alive! I will say this, I have friends at work that are huge movie buffs too, one dude always says whatever you see in sci-fi movies comes to life... Ya know with the recent revelations on UAPs, seeing how some of the Predator series hints to how technology was possibly passed from Extraterrestrials to humans, is Hollywood sort of preparing us for something in the Future with the new Space force that was recently formed? As I always say, we look for patterns within the sport of fishing to target species, look for patterns within real life and what you see in sci-fi movies, because they are definitely there!!! Shit, even the Space Force's own logo has a little bit of pattern and nostalgia in it I'd say... Ya know, what does a sphinx have to do with outer space? 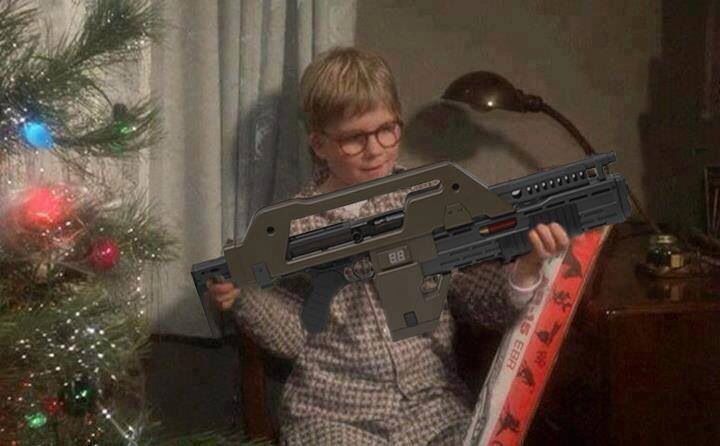 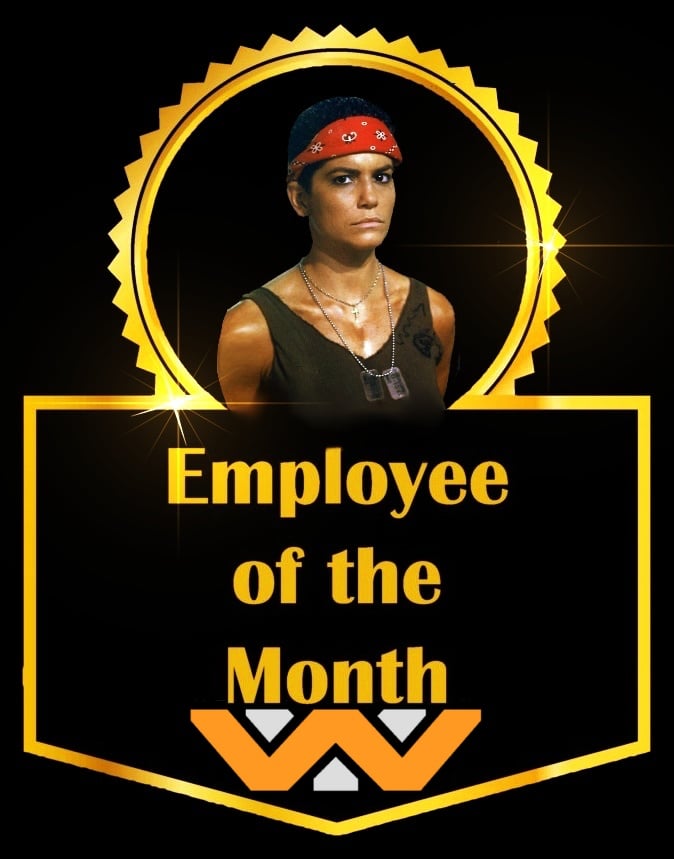 Dozens upon dozens of fan made Aliens trailers... 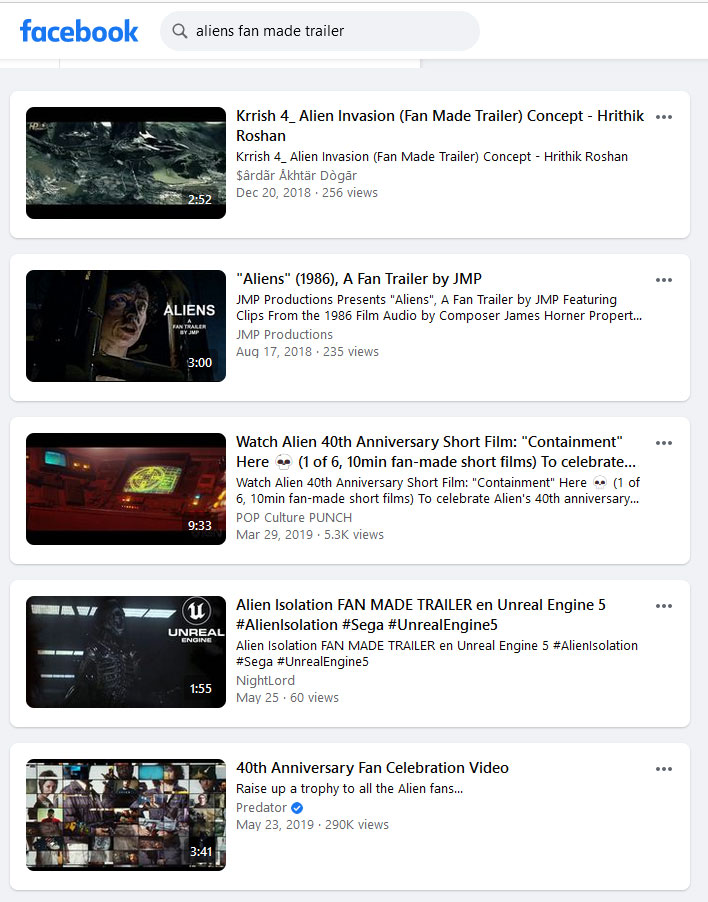 Some are such huge fans of the 1986 cult classic, some of brought to life the movie with there own prototype of the M56 Smartgun, incredible!

I think some of the gaming companies know what a huge fan base this film Aliens still has, so they've decided to put out a video game based on James Camerons adaptation, with similar guns, tracking devices, and storyline.

I have to say, the only sci-fi movie that maybe stands up to Aliens or to the original Predator movie, would have to be the movie Edge of Tomorrow!

Was Ridley Scott's movie Alien the first Xenomorph movie? I don't know if you remember, but there was a cheesy flick that was on TV called "Something is out There," the film hasn't really lived up to modern day like Cameron's Aliens has and is now quite outdated, but there's still a few clips from this movie that are still kind of horrifying to this day.