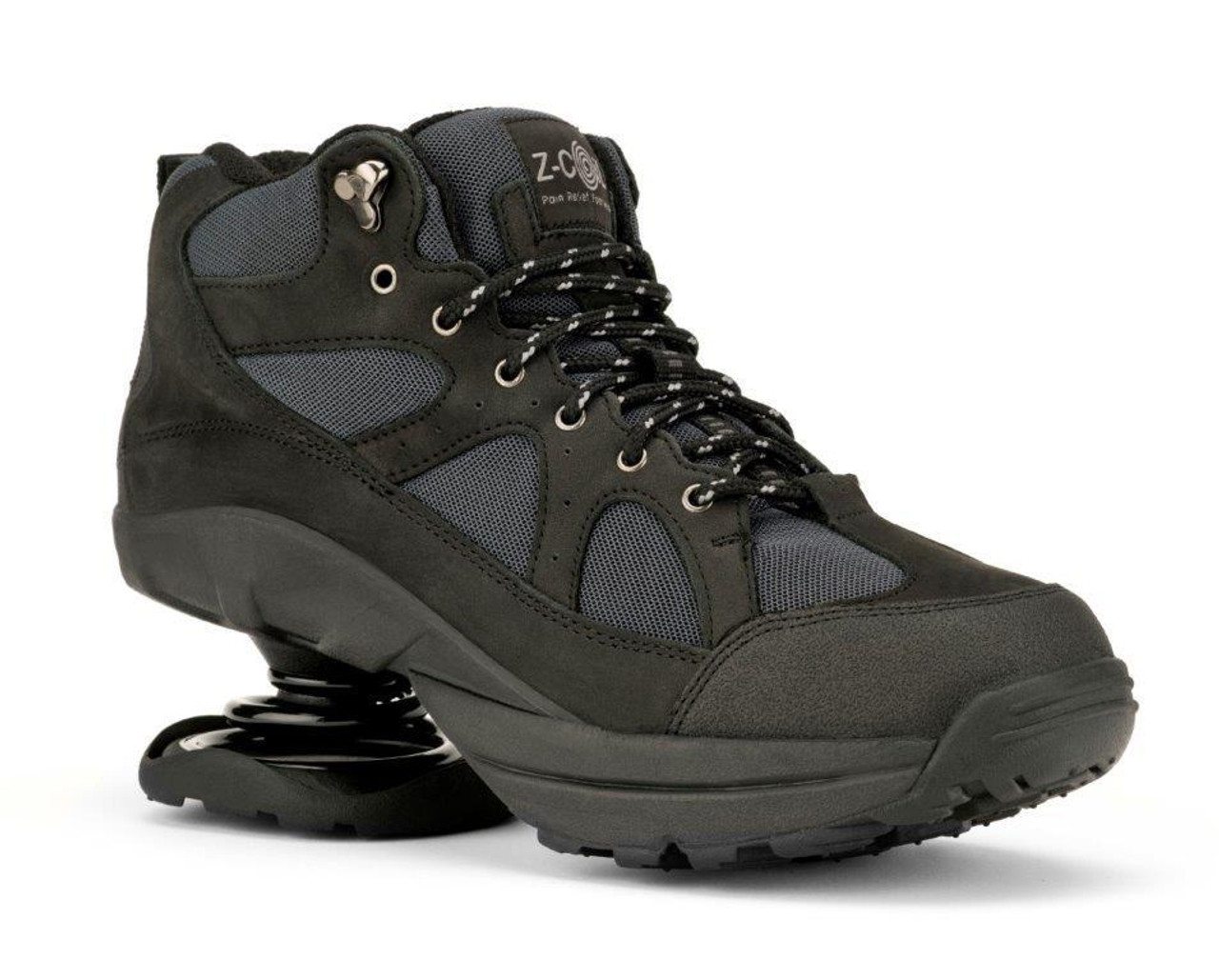 I've talked about how sometimes you have to go to War with the Great Musky, how athletes that play rugged sports like Football and Hockey make great Musky Fishermen. Even so... Even the toughest of guys still have to take pain pills and cortizone shots to keep their bodies up in tip top shape to play those sports! But what if you could prevent all that, prevent all the aches and pains that ripping Bull Dawgs like Pounders creates? It's without a doubt a popular topic brought up on the musky forums from time to time... Back pain, neck pain, knee pain, and even foot pain when you're casting for hours in a single spot. Could a custom shoe that uses an innovative technology prevent that? Yes!

If you haven't heard of Z-Coils in the last couple of decades at the work place, you're missing out... I think it's more commonly known at jobs that force you to stand for long periods of time, something us Musky fishermen that cast for these beasts have something very common with workers that stand for long periods of time, gravity can be brutal. If you troll for musky, well this article probably won't suit you as much. But at my work place, I stand a lot, get breaks here and there, but still, the amount of havoc to my back standing and walking for long periods of time can be brutal. I first started off with Skechers new glide step, they were ok, but after a few months I started to feel heel spurs starting to set in, even a little back pain. But after remembering where one job where I wore Z-coils years ago that basically prevented all of this, I headed over to eBay to buy some at discount, whala, within a few days of wearing them the inflammation in my heels started to slowly disipate... During which, I was till musky fishing on the weekends, still wearing my normal Skechers tennis shoes, but my heels were flaring again... So I thought, what the hell, I'm walking all over Metro Park, standing in some rocky spots for hours on end casting endlessly, what about trying my Z-Coil work shoes for musky casting... So the next weekend, I tied them on, went out for both my two off days from work, I couldn't believe the relief I was getting in both my feet, knees, back or what I like to call spine, and even my neck. Some of the inflammation I was getting when ripping Medussas was barely noticeable anymore and when I woke up the next day, I barely had less muscle aches and pain. I mean lets be honest with ourselves, you're still going to get a little soreness from breaking down your muscle fibres. For the most part, I was immediately impressed, thought what if I could buy one of their more rugged shoes like the Outback and use that for musky fishing since my Z-coil work shoes worked so good that weekend for me! So just recently, I decided to buy a pair!

I really can't wait to try them, I'm almost as excited to trying out these Z-Coil Outback shoes, to when I got to tred out the Shimano Tranx the first time, which is known for being bullet proof and super smooth compared to my standard spinning reel I've been using! Everyone's always talking about getting a bullet proof reel when musky fishing, well what if you could bullet proof your own bottom. I mean bottom line, less inflammation in your joints and overall body, means less down time, more hours casting, which will result in more musky in the boat! Do the math!!! Over the years of bass, walleye, and musky fishing... I've even witnessed other anglers lay down on my boat and try to stretch their back out at times, I always wondered if there was a way to prevent this pain and down time some of them were dealing with. Ya know, I found out an incredible supplement called CBD oil called Charlottes Web by the Stanley Brothers that extremely helps, it's safe, you can take it long term without hurting your kidneys or liver, has no addiction, and is quite potent even at lower dosage. However, what if I could prevent from taking CBD all together?

It took me awhile to put two and two together that these shoes would work great for musky fishing, I wore Z-coils like a decade ago at a job that had me standing hours on end, but after getting another new job similar, it gave me the idea. They are definitely quirky looking, may take a week or two for your feet to get used to the balance issues, but it's well worth it, believe me. A few weeks ago I put four 16 hour days in a row, plus another 8... So that's 72 hours in one week, yet still had enough energy and pain free to get out musky fishing on the weekend casting and I'm about to be 40 years of age. So these Z-Coil shoes will not only increase your uptime for musky fishing which results in more fish, it will allow you to still get out musky fishing despite a hard weeks of work, something also to think about... I think putting a spring in a shoe was an incredible idea and invention, sadly, they just aren't as popular as they once were. It's kind of like an old lure that fishermen forgot about, they've moved onto a new fishing lure that everyone's hooting and hollering about like the Chatterbait, but forgot about something like the Mepps inline spinner for bass fishing that is still quite deadly. For some of these lures, the manufacturer can stop making them just because they're not selling, even though it's a really effective lure. If you haven't noticed, human beings are very trendy and fad followers, I remember one decade when Powerbait first came out it was super hot in the 90s, the next decade it was Gulp, what's really super popular now is chatterbait. Despite all that, I think there's still a lot of really old effective lures that work just as good as the chatterbait but a lot of anglers forgot about, I think you could say the same for these Z-Coil shoes. I knew a lot of workers that wore them at a job a decade ago, now barely anyone wears them. I get a ton of workers that come up to me saying they're going to buy them at work, but they never do, one of the reasons they tell me is the price. Then I ask them, do you know what heal spur surgery costs or even back surgery if you have a herniated disk? Believe me, they are worth every penny! Worth it many times over... Remember the old saying, can't put a price on health? Ya know, Z-Coil's slogan is "pain relief footwear," but honestly it should be "can't put a price on health..." lol

It's just too bad the Z-coil Michigan location in Dearborn closed up, if you do have time to read the reviews that are still up on Google Maps, be sure to do so, if you don't take my word for it. One day when I was working, a customer came up to me and asked how much I like them Z-Coils, I go they're worth every penny, they help prevent heel spurs, knee pain, and even inflammation in my spine. I like using the word spine instead of back, because that word goes much deeper to me! If you ever know what real back pain feels like, aka spinal pain, I think spine defines it more! Anyways, he said he uses these shoes at his die cast job where it has him standing long periods of time and ever since he tried them out, they've been a Godsend and helped him keep his job he might of ended up leaving because of pain. That kind of rings a bell to me, hearing what so many fishermen that troll for musky say, that they don't cast for them because of the amount of pain you have to deal with during and after.

Anyways, whether you believe me or not is your own conundrum, I know these shoes work incredibly well for me when musky casting and at my job and really that's all that matters. I've found a way to extend my musky casting expeditions with barely any down time which will result in more fish, bottom line! But I'm still worried about the company closing it's doors and discontinuing these shoes, just like how I'm kind of worried that Strike King might discontinue the 8.0 Squarebill Magnum bass crankbait because it's not a very popular lure for bass fishermen because it doesn't have consistency, even though it will probably catching mammoth bass and monster musky that take longer hours to put in to catch, which a lot of bass fishermen don't have the patience to do and you really have to use beefier bass gear to cast that lure anyways. It's really really disappointing to me when a great company closes it's doors even though it has a great product, but really, this is an incredible innovative invention if you ask me, using technology no other shoe uses... One can only hope it survives the Corona Virus era we're living in that's starting to swallow up many family run businesses even though they have a great product, that still doesn't matter, they still could close their doors at any moment!

So if you ever do get around to purchasing a pair, I repeat, do not get the covered coil, reduces cushion big time, keep the spring exposed. And if you do buy for work and you walk through spills, puddles or slick areas quite commonly at times, make sure you get nonslip heal! But for musky fishing, I would probably want the more rugged sole... I did a little review of the Z-coils here with this Tiger Musky pond idea, lol, but it wasn't very thorough and those were actually my black leather dress shoes I wear for work, once the bad ass Outbacks come in the mail, I'll have to get a up a review video soon. I also bought a bunch of new lights for musky night fishing as well too, a Fenix head lamp and a Conpex telescopic camping light, which also are great products that I'll have to review. And really, this is what technology is here for, to make you a better fishermen, stronger, longer, or should I say eternal fisherman, use everything you have access to!